Some information about Pink Peppercorn

The scientific name for the pink pepper tree is Schinus terebinthifolia Raddi. It is a medium tree which reaches between 5 and 10 meters in height. It is native to South America and is found in Atlantic Forest biomes almost all over Brazil. The trees bloom between September and January and its fruiting usually happens from April to July.

The pink peppercorn is a fruit which measures 3 mm in diameter and is largely found in the pink pepper trees. Widely used as a spice for seasoning white meats and pasta, the pink peppercorn also lends flavor and beauty to cocktails, chocolate and sophisticated dishes. Its bright-red shell surrounds a single seed, which is edible and abundant in essential oil, giving the fruit a spicy and slightly sweet flavor. 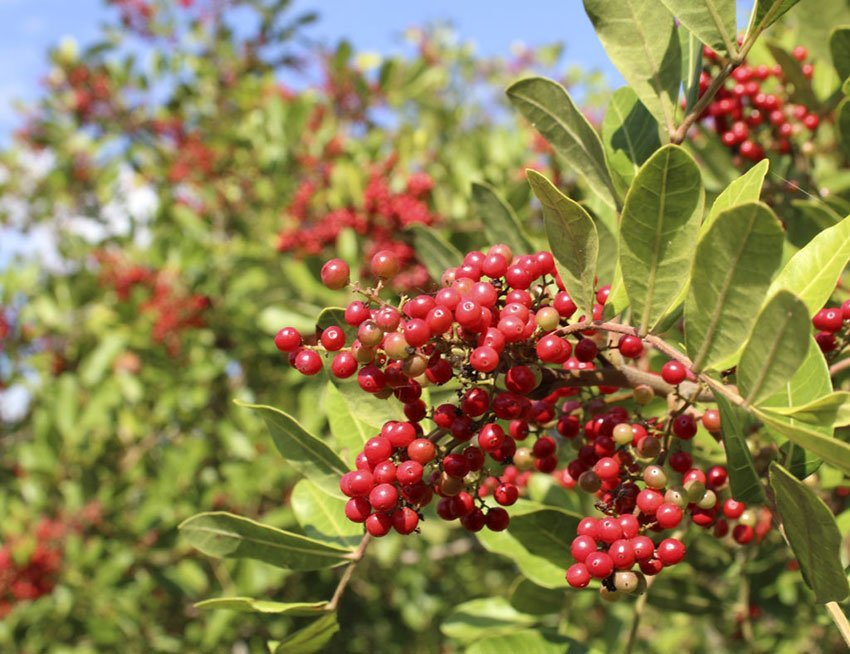 Although it is common along the Brazilian coast, the plant is easily adaptable to different habitats, including the driest ones. The national production is concentrated in the state of Espírito Santo, where the highest number of commercial plantations are found, as well as the biggest exporters. 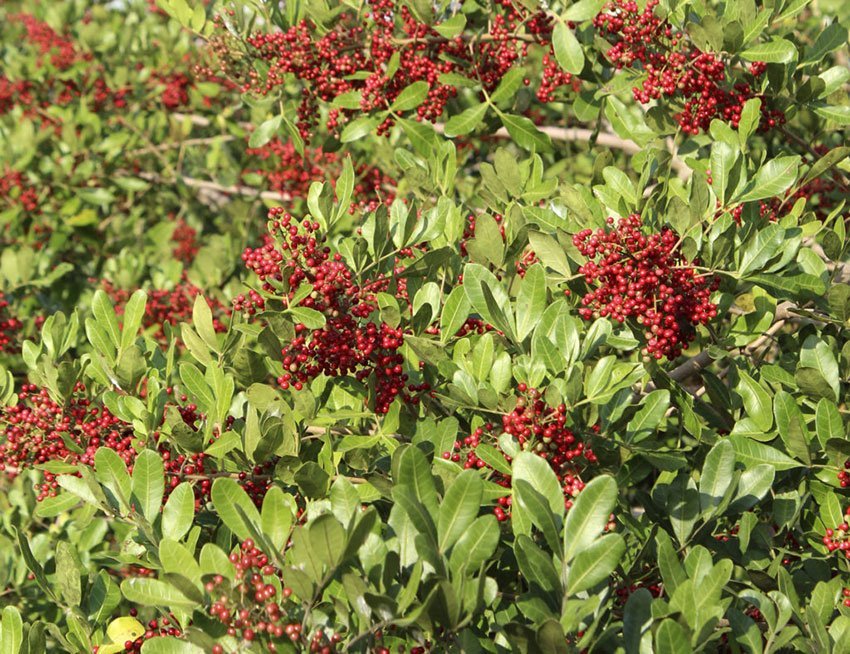 Common along the Brazilian coast, the pink pepper tree is easily adaptable to different habitats

The pink peppercorn quality is intrinsically linked to the maturity of its fruits. The recognition is based on the color of the skin, which ranges from light green to intense red. Even though both unripe and ripe fruits are rich in essential oil, the expected aromatic profile is only found in the ripe ones, which are bright-red.

Due to a continued increase in market interest in the pink peppercorn, technical assistance and rural extension bodies, in collaboration with farmers, have developed management and genetical improvement techniques which enabled quality, productivity and lifetime improvements of the pink pepper tree.

Harvesting is carried out by hand and in a natural way. Chemicals which induce fruit dropping or accelerate maturation are not used, different from several commercial cultures nowadays.

Soon after harvesting, farmers start pruning the trees. This step is necessary to stimulate the sprout of new branches, where fruits will grow in the next crop. 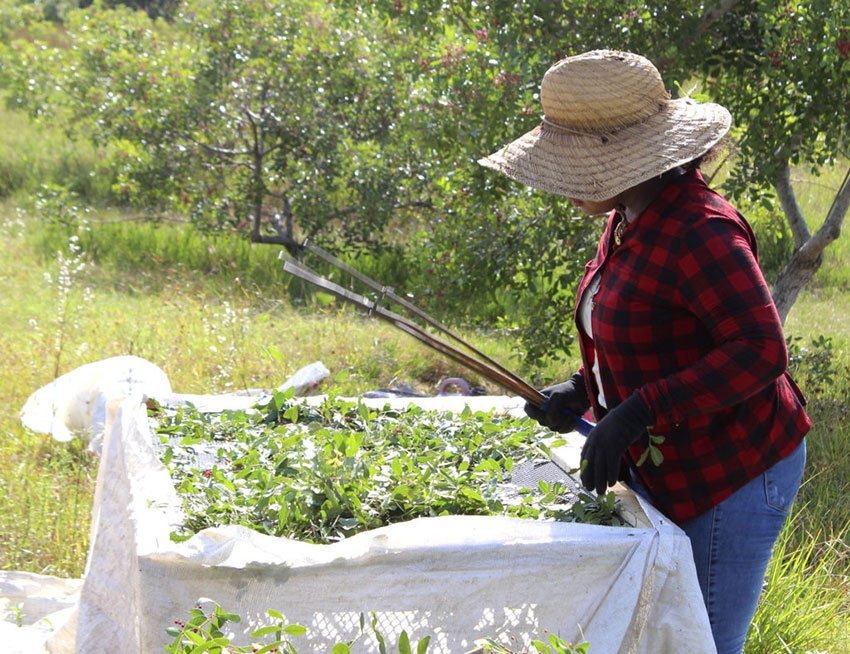 Boosted by the prominent position held in the global gourmet cuisine, the pink peppercorn culture has been gaining ground among the main agricultural activities in the Espírito Santo state. Year by year, a higher number of farmers start growing the plant which is seen as a good alternative to the cultivation of more traditional ones, such as the black pepper, eucalyptus and coffee. The pink peppercorn finds applications in mature markets, such as fragrance, cosmetics and gastronomy, which makes it a safe kind of investment to small farmers who are looking for market safety and diversity.

Besides being commercially attractive, the cultivation of the pink pepper tree has been an option to coastal community fishermen in the Espírito Santo state. In 2015, these workers were forced to interrupt their activities due to the consequences of the mining tailings dam collapse in the municipality of Mariana, in the state of Minas Gerais. The mud, with high levels of mercury, lead and arsenic, reached the Doce River, whose river basin supplies a large part of the states of Minas Gerais and Espírito Santo.

Planting the pink pepper tree became a new source of income to those whose main economic activity had been hampered by the environmental disaster. Thus, the fishermen became farmers as well, being advised by organs of the State on how to manage the plants sustainably. This way, they learned a new economic activity and, in turn, secured their livelihood.

The plant features fast growth and high resistance to drought stress. For being a more adaptable to poorer and drier soils plant, it is widely used for reforesting degraded areas and riparian forests. This contributes to the return of pollinators and seed dispersers, enriching local biological diversity. 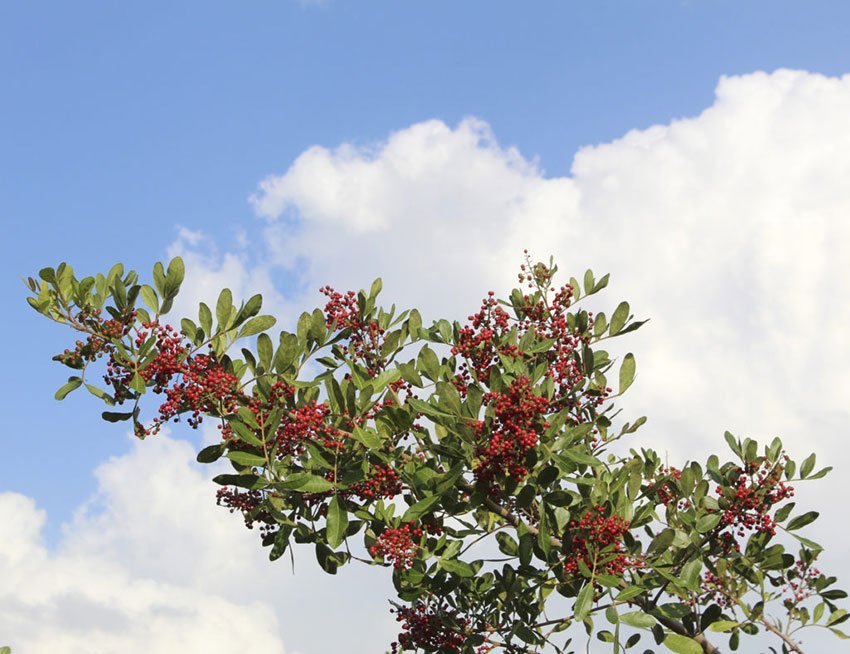 Pink peppercorn in the Fragrance Industry

Introduced to the International Fragrance market in the 1990’s, the pink peppercorn was originally used as an extract obtained from supercritical carbon dioxide, the state-of-the-art in the aromatic plants extraction industry. This ingredient brought a great differential advantage to high perfumery and became part of the most renowned perfumers’ palette. Its aromatic, spicy and fresh olfactory notes bring sensuality, romance and presence to the most luxurious and elegant fragrances. A strategic ingredient to the Global Luxury Perfume market, originally obtained from the Brazilian sociobiodiversity.

Kaapi decided to work with the pink peppercorn produced by small farmers from the municipality of São Mateus, in the state of Espírito Santo. Besides offering a high-quality product, the company is proud to be part of a production chain which fosters a positive impact in the social, environmental and economic spheres. Its olfactory profile is quite similar to the one found in the supercritical extract, bringing the same freshness and the aromatic differential, highly-valued by the international perfumery.